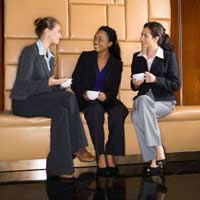 Many of the business networking events you find are regional, as opposed to being within the same industry (although those happen, too, of course). If you pause to consider the idea for a moment, it’s an idea that makes perfect sense.

Regional equates to readily accessible for regular meetings, with no one more than about an hour away from the meeting place, whereas an industry-wide network is spread across the country, making chances for everyone to assemble much rarer. There’s nothing wrong with occasional gatherings, but everyone stands to gain if they happen more often.

The Advantages of Regional Networking

A lot of business is conducted regionally, where transportation is easier, and proximity simply means there can be more contact between businesses on every level – people looking to change jobs will generally look within the same region, for instance, meaning they’ll have a network of contacts.

In terms of governmental support, there’s plenty on a regional level, not only from Regional Development Agencies, which are charged with developing business within the region as their remit, and so very actively encourage all sorts of networking, but even on more locals levels by cities and towns, where the Rotary (among others) will often be involved or there might be some informal networks.

By their nature, the regional networks reach across industry, which is generally a good thing, as it offers businesses greater opportunities to reach out and build mutually beneficial relationships – these occur within the same industry, of course, but where companies are in competition, things can never be quite as open.

Being able to meet on a regular basis, generally once a month, allows for a frequent exchange of information, keeping everyone abreast of business developments throughout the region, as well as plans for the future – and knowing these before they become official can prove to be very advantageous in many circumstances. Seeing others regularly also help the building of solid business relationships, and even genuine friendships. That can, and often does, form the backbone of a huge number of future business dealings.

Regional contacts also allow for more informal meetings outside networking events as well as the building of smaller, fluid networks that can serve specialised purposes – regional but within a specific field or industry, for instance, or for job hunting or recruiting. In these instances the larger network simply acts as a framework.

In addition to the Regional Development Agencies, you’ll find that many private organisations put together regional events – in fact, several have evolved into national companies from regional beginnings.

Those companies compete for business – it’s perfectly possible that there could be several regional networks operating within a single region. That’s really an indication of just how important and popular networking is.

Many of the networks have their own websites to promote their activities and help draw in new members, although the vast majority of those who join will arrive on the recommendation of existing members – a very immediate example of networking in action.

Perhaps the unfortunate thing is because they compete, the separate organisations don’t work together. Not in terms of creating a giant regional network, perhaps, but to co-operate and increase the opportunities for everyone.

With the exception of the big multinationals, the vast majority of businesses think and operate first of all on a regional level. It’s where their roots lie, and they care about the area – and that, in many cases, will be why regional networking remains the most important of all.