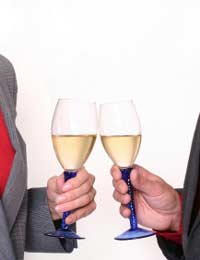 Business networking is an art, not a science. But good networking takes skill, and the more experience you have, the better you’ll be, not only at creating a network, but at the actual art of networking.

Always be prepared to network. Do your research about the people you’ll be meeting, what kind of an event it is and how you should act. If it’s a formal event, then present yourself formally. You’ll find that the networking will arise naturally out of conversations you have with those around you – business networking can be an organic thing.

Psych yourself up before a networking event. Remind yourself why you’re there, that you’re good at what you do (you wouldn’t be attending otherwise) and that your company, as well as its services and products, is the best. Go in believing in who you are and what you do, and you’ll find some very successful networking.

Remember why you’re there – to network. The free food and drink might be appealing, but they’re not the reason you’re attending a networking event. Focus on business. Remember names, collect business cards. Talk briefly but effectively, and don’t bore people! Set yourself goals, such as making three good network contacts at an event. Work the room effectively!

It’s not solely about increasing your own network. You can introduce others to each other, or earmark a new contact for an older one where they can help each other. It might not have any immediate benefit for you, but people do remember these things and return favours later. Also, the more you become acknowledged as a resource, the more people will come to you.

Always follow up on those business cards, referrals and suggestions. Not every one will pan out, but the people who network best are the ones who pay attention to detail. Simply collecting business cards isn’t enough!

Go to as many events and groups as you can reasonably manage. That doesn’t mean giving up all your free time, but the more contacts you make, the better your business networking will be.

When you’re talking to someone, ask a lot of open-ended questions that require more than a simple yes or no for an answer. That starts a conversation which can lead to a good contact.

Volunteer in organisations. It’s a great way to meet people who can be very useful for networking, but even more than that, you’re doing something worthwhile with your time.

Always be yourself. You might not believe it, but people can easily see through a false front and that fake bonhomie. Be relaxed at network events, talk easily, and enjoy yourself and the conversation. People will remember that.

Keep in mind what makes your business different, what makes it stand out, and don’t be afraid to state what it can do – but without exaggeration or sounding boastful. Be realistic, but proud!

If you follow these top networking tips, then the time you spend networking will go quickly, be more enjoyable – and definitely more fruitful!