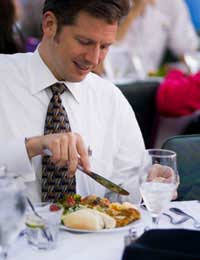 Networking groups aren’t exactly new. It’s a tradition that dates back a few decades, to the Rotary or even the business clubs that existed in cities all around the country. About the only difference is that now it’s been spruced up a bit. Instead of the long, boozy lunches that once seemed to be the standard manner of doing business in Britain, now everything is sleek and stylised.

Networking breakfasts aren’t as intense as that, but the principle is similar. As with lunch, groups meet about once a month to be able to talk over a meal.

In the past everything had seemed informal, and the network was just made up of local businessmen. As a sign of changing times, and to show the increased emphasis put on networking as a business tool, these days there are companies that exist solely to put on networking events around the country.

Breakfast and lunch events tend to be regional. By their nature that region has to be quite small (since everyone has to get to the office immediately after), and they’re usually held once a month. Participants pay a fee to the company hosting the event, which arranges a venue and also for the catering.

Of course, these companies arrange similar events all over the country, regionally or by industry. The fact that many exist in competition, and often sell out the places on their events, is a strong indication of the way people view networking these days – as a vital part of doing business. For many, the cost – usually around £10 – makes for an excellent investment, if only for the contacts that are there to be made.

How Do They Work?

A few groups are very informal, and simply offer people the chance to eat and circulate without any type of organisation. That’s very basic, but works for some people, giving them just the chance to mingle and talk – there’s generally not the time to conduct real business at these meetings.

Other groups can be more formal. Some will give each attendee a certain amount of time – often just two minutes – to talk about their business. Others will give the floor to just one member who can then talk at much greater length.

One constant is that the participants will have the chance to talk to each other and begin to build business relationships that can grow and last. That’s true whether the events are organised by a professional company (in which case they’ll always have speakers and a regulated structure) or just grassroots affairs.

The popularity of networking events continues to grow as businesses find them to be a very cost-effective tool for increasing sales or simply building relationships with others. Of course, business cards still have a part to play, and should be handed out and collected from those you haven’t met before. But as with anything else, you need to follow up on them. Makes notes on the back about the people and where you met, then send an e-mail or make a quick phone call.