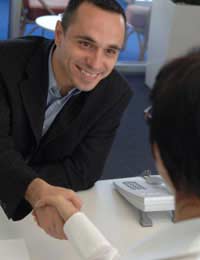 Referrals are the lifeblood of the salesman. One of the basic tenets of all sales training is to ask for two referrals when you’ve made a sale, because they give you an introduction to possible new customers.

With someone’s name and an implicit recommendation, it’s a great way in to a new buyer. You’re more likely to be able to talk to someone and have to time to pitch your product or service, and possibly even build a relationship with the potential client.

It’s certainly much better than the cold call, where the success rate is inevitably low, and the chances of even sitting down with someone are quite slim.

How To Get Referrals

There are salespeople who will pay for good, qualified referrals. They feel it’s worth the money simply to have an introduction to a company. Granted, they don’t pay a lot (although often there will be a increase if a sale is made), and in many ways the referral functions more as a lead in this case, rather than a “real” referral, where you can drop someone’s name. But you’ll still be able to ask for a specific individual in a company.

That’s certainly one way to obtain a referral, but the quality won’t be the best, largely just one step up from a cold call.

Take advantage of the business you already have. Go back and visit people who’ve bought your product or service. Ask them how satisfied they are. With those who love what they have from you, ask them if they know anyone else who could benefit from it – a referral, in other words. For those who aren’t so happy, make everything right, so they’re content, and they’ll be impressed that you took the trouble to follow up. A little while later, check back again, and if they’re happy, ask for referrals.

Make customer service calls a regular part of your routine. Not only does it ensure that everything ticks over well, and possibly even increase orders, it helps develop a relationship with the client, and offers a chance to ask for referrals. Done once a quarter, it doesn’t seem too often.

Where a referral has led to a sale, write a short thank you note to the person who gave you the original referral. It might not seem like much, but the chances are it will mean a lot, and could well bring in more business later by word of mouth.

Referrals don’t just happen. You have to actively pursue them. To the best salespeople they’re a major tool in the arsenal and a vital part of business networking, because the conversion rate of referrals into sales can be very high.

You need to ask for referrals. That’s doesn’t mean badger or hector clients, but ask them if they know others who could use your service or product, and then follow up on that. But referrals don’t just have to come from clients.

You could be having coffee with someone in another field entirely and he might say that one of his customers could use what you offer, and give you a contact’s name at the company. That’s an excellent referral, because you not only know who to talk to, but also that they’re looking for what you have, and you need to pounce on that speedily.

Make the most of every opportunity. As with any kind of networking, you can’t be shy – but at the same time, you don’t want to be obnoxious. Referrals can be very powerful, and a great source of new business, as long as they’re used right and you follow up on them properly.