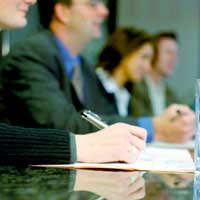 The chances are that you won’t attend to many workshops over the course of a year. The really good ones are expensive and often run for several days, taking up valuable working time. Some deal with aspects of business in general, sales techniques and other helpful areas, while others can be specialised and technical. There’s plenty to be gained from both, not the least of which is the chance to make valuable business contacts.

Workshops are generally in several sessions, each dealing with a separate areas, and quite often with each session hosted by someone expert in that particular area. There’s a lot to take in, and the hours spent there can be quite intense. In some instances workshops will take place at a location where all the participants stay for the length of the course, whilst others will involve a commute home each night. Of course, some workshops are briefer, just lasting a single day.

Making The Most of a Workshop

Probably the very best use you can make of a workshop is to present a session there, especially if it’s a prestigious event. It brings kudos to you and your company, and automatically brings you in contact with all those attending, many of whom will want to talk to you afterwards. It establishes you as an acknowledged expert in the field, someone people can turn to, and they will – it’s like a networking magnet.

It’s also easier said than done. You’ll need to be well established in the field to even be considered, and even then you’ll find plenty of competition – it really helps to know the people putting on the workshop. A plus is that you’ll also be paid for your time and expertise.

More importantly, it’s a superb opportunity to network, with all the people coming to you. They’ll remember you, making future contacts easier – in many cases they’ll be the ones to contact you, almost an ideal situation.

The Times To Network

If you’re an attendee, rather than a speaker, there are still ample networking opportunities, especially if the workshop lasts a few days. You’ll be tired by the end of the day, but as you’ll probably all be eating together, there are plenty of opportunities to talk and get to know one another.

Since you’ll all have similar interests (why else would you be attending the workshop?) there’s common ground, and you’ll discover quite quickly that they’re as eager to make contacts as you are. Perhaps the biggest advantage of a workshop that lasts more than one day is that you’ll have the chance to really develop several of these relationships before the course ends, which puts you on a very solid footing for later.

Even with one-day workshops there are chances to network, at lunchtime, on breaks, or even after the workshop has ended – you might go out for a drink with some of the others, for instance. You won’t have that much time, but it will be enough for an initial acquaintance, and you can follow up once you’re back in the office.

Not only will you come away from the workshop more knowledgeable, with ideas you can put into everyday practice, you’ll also have a whole new list of contacts that can grow into fully-fledged business relationships.